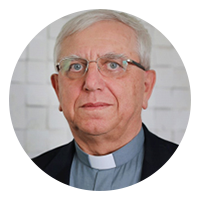 Rev Dr Adam Żak SJ graduated in philosophy in Krakow, Munich and Rome, and in theology in Naples.

Between 1990-1994 Fr Żak was the Rector of the Jesuit Formation house in Krakow, Poland. Between 1996-2002 he was the Provincial of the South Poland Province of the Society of Jesus (Jesuits), and between 2003-2012 General Counsellor and Regional Assistant for Eastern Europe at the Jesuit Roman Curia. From 2008 he was the Regional Assistant to the newly created Assistance for Central and Eastern Europe.

Since 2013, Fr Żak has been the Coordinator for the Protection of Children and Youth with the Polish Bishops’ Conference. In this role he has developed the structures of safeguarding in the Church in Poland.

In 2014 he was the founder and remains the Director of the Child Protection Centre (CPC) at the Jesuit University Ignatianum in Krakow, Poland.

Fr  Żak co-organized the first international conference on sexual abuse in Poland and conducts safeguarding training in Poland and in several other Eastern European countries.

As Director of the CPC, he co-organizes postgraduate studies in the prevention of sexual violence against children and adolescents.

Since 2014 Fr Żak has been an active participant in the debate on the protection of minors in the Church and society in Poland.